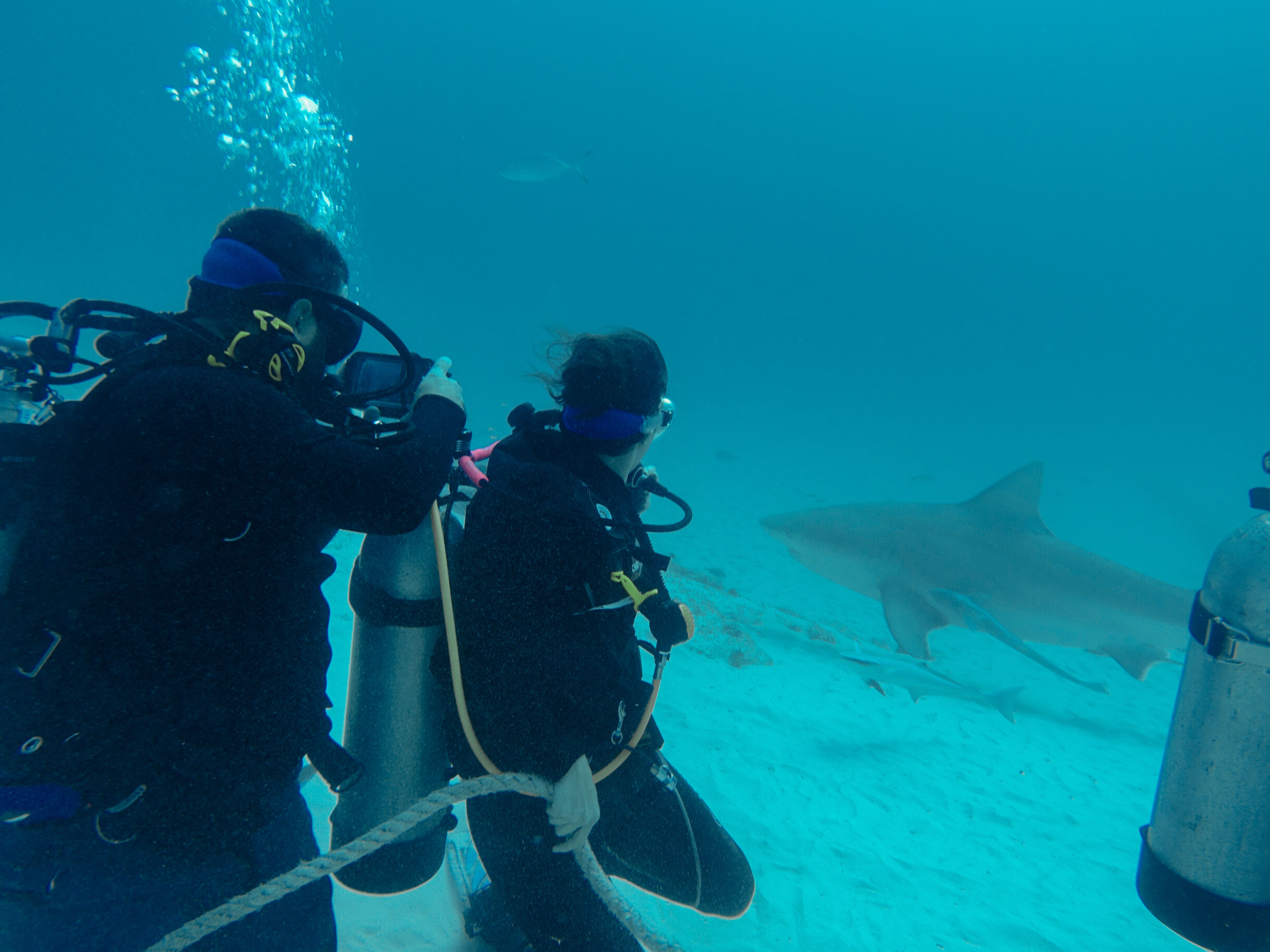 Its scientific name is Carcharhinus leucas but it is also known as the Sardinian shark, lamia shark or Zambezi shark. It is also called “Bull Shark”, but it should not be confused with the Carcharias taurus with which it does not even share a taxonomic order.
Its imposing presence is one of its greatest attractions: it measures up to three 3.4 meters and weighs between 90 and 230 kilos (depending on its age). They live in temperate water, so we can find them in practically all the seas on the planet, from South America to Florida, all the African coasts, high concentrations in Polynesia and Oceania. 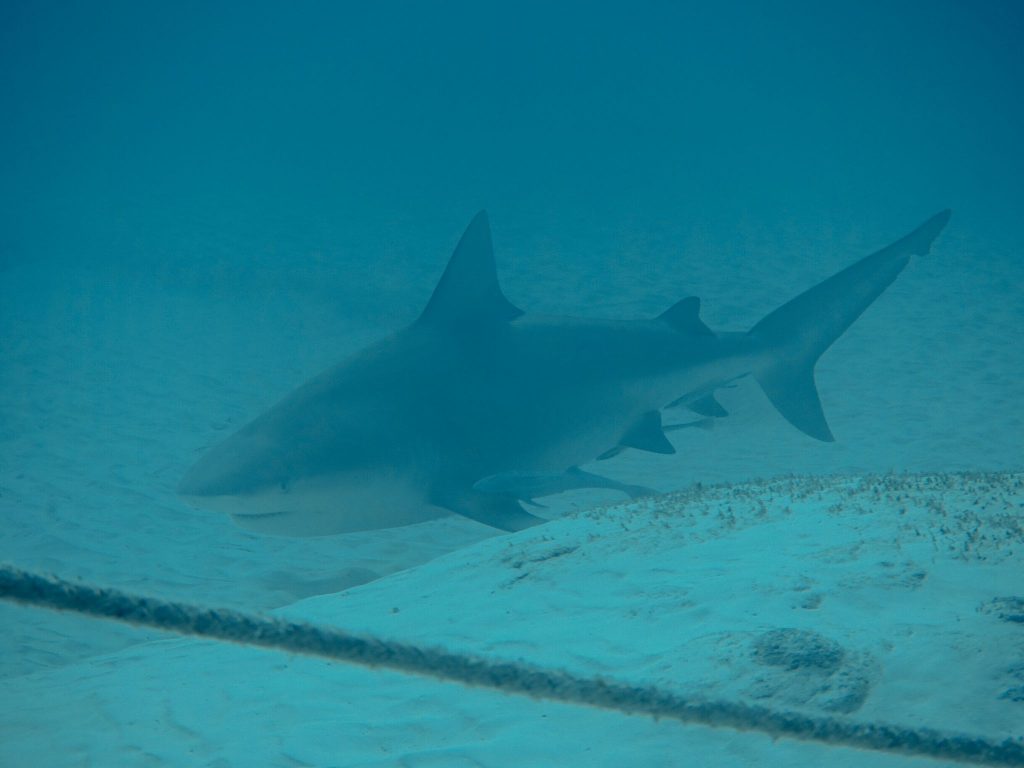 These fast and agile predators will feed on anything within their reach, such as fish, dolphins, and even other sharks; but don’t worry, humans are not part of their normal diet. However, they do frequent the murky waters of estuaries and bays, often attacking people by accident or out of curiosity.

The mating stage of the bull shark occurs between the months of October and November, this so that the females can give birth during the spring. This is an ovoviviparous species. This means that the eggs are inside the mother and she opens inside: once the egg has opened, it continues to develop inside until they are the optimal size to go outside. Its incubation period can last from 6 to 9 months, this depends on the evolution of the offspring. In general, this species usually has young every 2 years.

Bull sharks, whose bite is considered the most powerful of any shark species, usually inhabit marine waters, although they also have an unusual ability to adapt their bodies to fresh waters. This adaptation is thanks to the fact that their kidneys, liver, and Bull sharks rectal gland can gradually adjust to the salinity of the water in which they are found. The reasons still remain unknown within the scientific community. However, there are several theories: that these specimens travel to these waters to get rid of parasites that only inhabit salty waters or if they do so as a way of ingesting other nutrients that do not exist in the sea.

Currently, the bull shark is not a threatened or endangered species. However, in many places they are fished for their meat, skin and oil, so their population is likely to be declining. A study has revealed that its average length has dropped significantly in recent decades

Throughout our planet, we can be lucky enough to dive wit 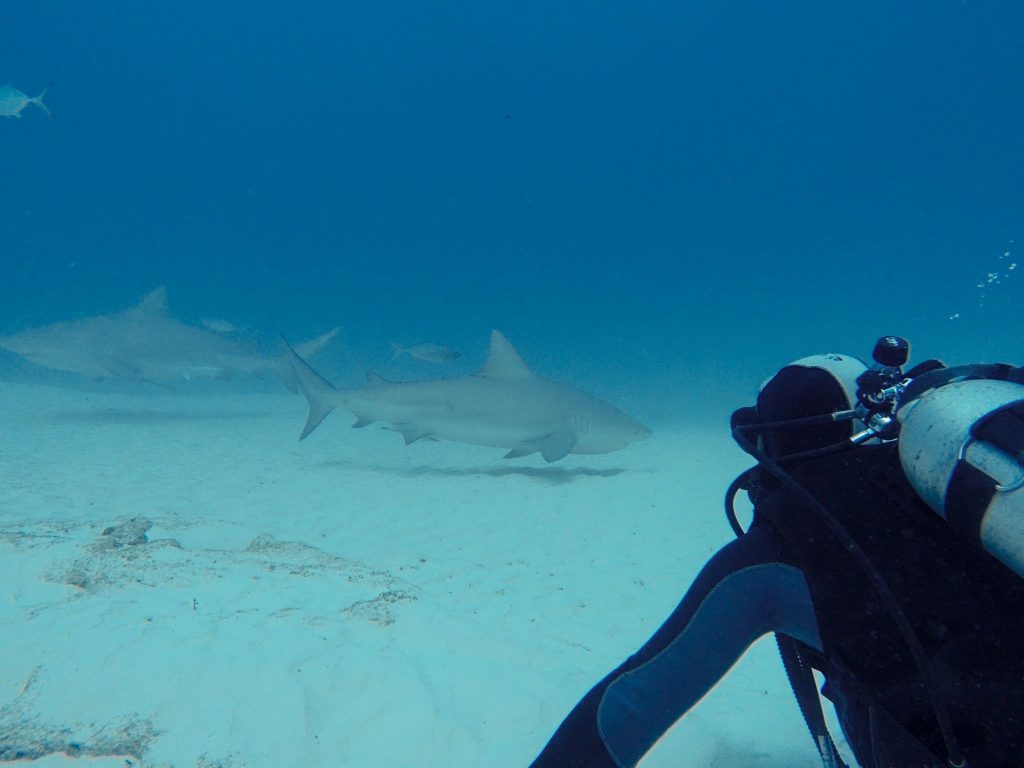 h the bull shark. The most emblematic places to do so are the seas of Fiji; Jupiter, Florida, and Playa del Carmen, Mexico. That’s right, we can consider that in our country we have one of the best places in the world to dive with them.

Because they require warm water to give birth to their young, from November to March off the coast of Playa del Carmen you can dive in the presence of 8 to 15 pregnant females.

Since humans are not part of their diet at the time this activity has been carried out, no shark accident has been recorded in Playa del Carmen.

Being down with them, watching them, we feel safe, at peace with one of the most emblematic and feared sharks that exist.

We invite all certified divers to come and experience. Without a doubt it is one of the best experiences.