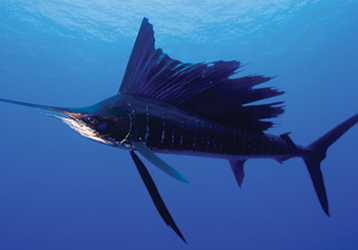 A flock of sea birds eagerly watches from the sky waiting for the moment when the underwater hunt begins. A group of sailfish, 3 meters long, approach a ball of sardines. They will use low energy to make the kill, never wasting a fin stroke. The group works in packs, similar to wolves, and they corral the school of sardines in a smaller ball from the bottom by forcing them to rise to the surface. The flock of sea birds begins to descend preparing for their attack, as well. The surface of the water seems like a barrier to the sardines, there is nowhere for the sardines to hide in the open ocean. The hunting begins, sailfish swim at great speed crossing the sardine ball. They work together, each sailfish takes a stab at the prey from different positions. Attacking from the right and the left, again and again. The sailfish body changes colour, with the normally bluish-silver lateral sides darkening to almost black just before the beginning of an attack. Almost as a kind of communication between them to indicate who will attack first. This way, their prey is unable to predict from which side the attack will occur.

As different sailfish attack the sardine ball, more and more are hurt. To survive, the sailfish must find prey daily, so their entire existence will depend on the move of the sailfish’s rostrum. This coordinated attack is impressive. It is obvious why they are called ‘sea wolves’ when you witness this frenzied speed of attack. 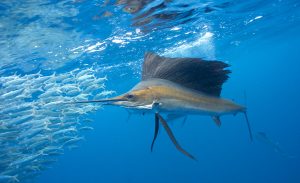 Get more information about Sailfish encounter in Cancun & Riviera Maya !!