Whale sharks: The largest fish in the ocean 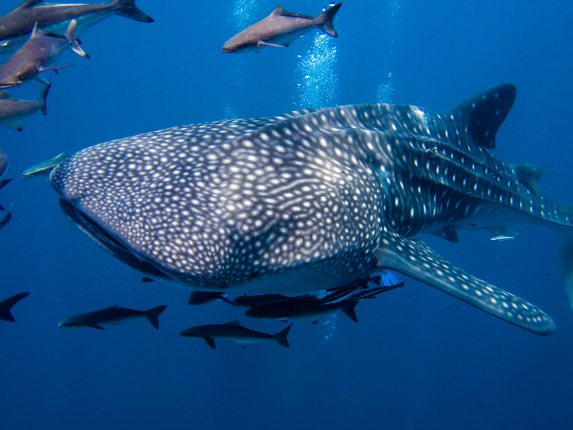 There are many amazing creatures in our oceans, with different size, colors and with many functions within the marine ecosystem. Certainly, one of the most astonishing animals are sharks, and particularly if some species could reach up to 13 m length and gather in large numbers in some particular locations such as the Mexican Caribbean!
There are aprox. 440 species of sharks (although this number is continuously been updated), but the whale shark is the largest, which makes it the largest fish in the ocean! It is important to make it clear that this creature is indeed a shark and not a whale, regardless of its rather confusing name. It is called a whale shark because of its large size and also because of its food items which are similar of those of an actual whale (which is a mammal).
Shark, rays and skates form a group of animals called Elasmobranchs which have a cartilaginous skeleton. Elasmobranchs along with another fish called chimera (elephant fish) are known as ‘cartilaginous fish’ whereas the rest of the fish (e.g. tuna, groupers, marlin, etc.) are known as ‘bony fish’ because their skeletons are made of bone like ours.
The scientific name of the whale shark is Rhincodon typus and it is different from other sharks mainly because of its large size, the white spots that cover its body, its tiny teeth (3 mm), and its prey items which are the smallest creatures in the ocean as well as some fish eggs which are all together called plankton (although it can also feed on very small fish).