Migratory sharks: the annual visit of whale sharks to the Mexican Caribbean 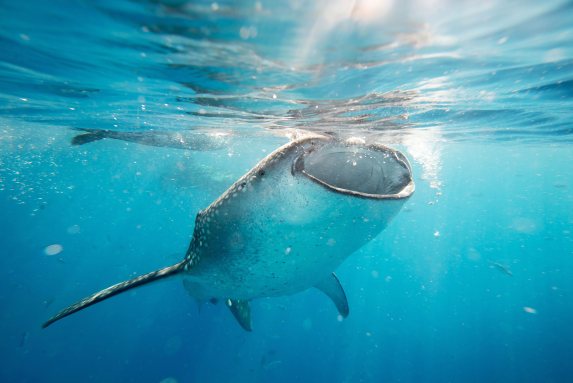 Although there are still many unanswered questions, scientific studies show that this species do migrate long distances and aggregates most likely due to high concentrations of food. Some studies show that whale sharks can move up to 8000 km and can dive down to 1600 m! Aggregations of whale sharks have been reported in many places like Australia, Indonesia, Seychelles, Madagascar, Maldives, Qatar, Belize and both coasts of Mexico.
The waters of the Yucatan peninsula (which include the state of Quintana Roo) in Mexico, are nutrient rich due to upwelling and convergent oceanic currents during spring and summer. Whale sharks visit this area during such seasons and can form impressive aggregations of up to 420 individuals!
Teams of Mexican and international scientists have studied this shark here and have observed that some individuals come back in consecutive years and may stay for about 6 months. They have recorded some individuals that move to the Gulf of Mexico and Cuba after spending the summer here and other individuals have been resighted in Honduras, Belize and the southern Caribbean Sea.
Investigadores implantando marca satelital (arriba) y tiburón ya con marca puesta (abajo) / Scientists satellite tagging a shark (above) and a whale shark with a satellite tag (below).
A female who was satellite tagged here (in the Yucatan peninsula), showed a migration to remote locations in the mid-Atlantic between Brazil and Africa! Scientists suggest that this female may’ve followed this route to reproduce and may’ve gone to this remote area to give birth in the middle of the Atlantic Ocean! Isn´t that amazing?
*Migration of a female whale shark satellite tagged off the Yucatan peninsula.
Are you interested in research and conservation of Caribbean marine life? Keep reading our blogs.